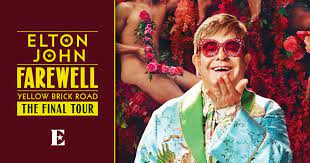 What does 100% guaranteed mean?

During a press conference yesterday in New York, dressed in a crystal embellished Gucci blazer, Elton John announced to the world that he will embark on one final tour before retirement. The tour, named 'Farewell Yellow Brick Road', will last for three years and will include 300 dates. To all you Gucci addicts out there: prepare to drool because Elton has selected the fashion house's Creative Director, Alessandro Michele, to create all the glittery outfits for the tour's entirety.

To make the announcement at a special event in New York’s Gotham Hall, John wore a custom Gucci Flora jacquard tailcoat adorned with hundreds of hand-sewn crystals, pearls and “Gucci loves Elton” emblazoned across the back. If the matching crystal bow tie, ruffle evening shirt and starry shades are a taste of what’s to come when the tour kicks off on September 8, Michele has created a tour wardrobe to rival John’s Seventies stage outfits by glitter king Bob Mackie.

Tickets for the farewell tour — which includes stops at Madison Square Garden Oct. 18-19 and L.A.’s Staples Center next Jan. 22-23 — will be available via a credit card pre-sale Thursday and a general sale Feb. 2.